Sheila-Na-Gig Editions is proud to present our first fiction title — Mark Small: This Is Your Life by, John Bullock.

Pre-Order Now: Purchase through Sheila-Na-Gig online via PayPal for 20% off and Free Shipping (U.S. only): Ships in late April/Early May. 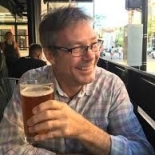 JOHN BULLOCK is English and has an MFA in fiction writing from the University of Virginia. His stories have appeared in the Antioch Review, Fifth Wednesday, the Laurel Review, Prague Review, Clackamas Literary Review, in the anthology Open Windows III, and in other journals. He teaches high school English in rural Ohio. Mark Small: This is Your Life is his first novel.

ABOUT THE BOOK: Fourteen-year-old Mark Small has no idea who he is. Anxious for connection and friendship, he embarks on a series of illegal break-ins to punish his father’s nonpaying customers. But mostly he likes to poke around in other people’s lives, a habit borne of his lonely childhood in an English seaside bed and breakfast. This debut novel is a poignant and funny coming-of-age story about identity—in all its guises—tracing Mark Small’s adventures as he learns hard truths about family, friendship, and forgiveness.

ADVANCE PRAISE: “Mark is a wonderful character: young but wise; long-suffering; a survivor. Bullock can be extremely funny. . . but he sees life in its complexity, so that things that are funny are often tinged with sadness, while serious matters often have an element of slapstick about them. [Mark Small] is a clear-headed book about characters who don’t want to reveal themselves, or who want very much to reveal themselves, but wonder where and when and how to begin” –Ann Beattie, author of A Wonderful Stroke of Luck

“Mark Small offers readers many rewards—a light lyrical touch, an engrossing coming-of-age story, and a witty sensibility that at the same time embraces and explores the sadness underpinning every life.” —Christine Sneed, author of Little Known Facts and The Virginity of Famous Men

“John Bullock is a wonderful writer whose greatest gift is his honesty. He has a true skill for dialogue, and for the perfect little detail that makes or breaks a novel.” —Ron Riekki, author of UP

“Bullock somehow manages to infuse serious beauty and poetry into the very real voice of this remarkably likeable character. Funny and intensely felt, this novel holds a magnifying glass up to some of the ugliest parts of small-town life, and yet reminds us that there is still kindness, beauty, and humor in the world after all.” —Ashley Cowger, author of Peter Never Came

“The voice that describes this marvelous seaside place is a fountain of delights.” —Robert Pope, author of Jack’s Universe

NOTE: Sheila-Na-Gig fiction submissions are by invitation only. Please do not send us fiction at this time.

This entry was posted on April 5, 2020 by Grimmgirl in Sheila-Na-Gig online: News.