A Novel by John Bullock, Coming Soon from Sheila-Na-Gig Editions! 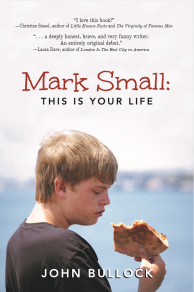 Sheila-Na-Gig Editions is proud to present our first fiction title — Mark Small: This Is Your Life by Ohio writer and high school English teacher, John Bullock.

ABOUT THE BOOK: Fourteen-year-old Mark Small has no idea who he is. Anxious for connection and friendship, he embarks on a series of illegal break-ins to punish his father’s nonpaying customers. But mostly he likes to poke around in other people’s lives, a habit borne of his lonely childhood in an English seaside bed and breakfast. This debut novel is a poignant and funny coming-of-age story about identity—in all its guises—tracing Mark Small’s adventures as he learns hard truths about family, friendship, and forgiveness.

ADVANCE PRAISE: “Mark is a wonderful character: young but wise; long-suffering; a survivor. Bullock can be extremely funny. . . but he sees life in its complexity, so that things that are funny are often tinged with sadness, while serious matters often have an element of slapstick about them. [Mark Small: This Is Your Life] is a clear-headed book about characters who don’t want to reveal themselves, or who want very much to reveal themselves, but wonder where and when and how to begin” –Ann Beattie, author of A Wonderful Stroke of Luck.

2 comments on “A Novel by John Bullock, Coming Soon from Sheila-Na-Gig Editions!”

This entry was posted on March 28, 2020 by Grimmgirl in Sheila-Na-Gig online: News.