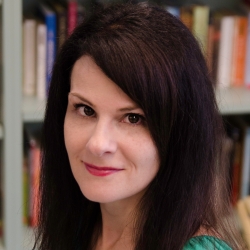 Bree A. Rolfe never really left the nineties. She often finds herself combing the internet for episodes of 120 Minutes and accidentally dressing like an extra in a Nirvana video. She worked as a music journalist for ten years before she decided she wanted to dedicate her life to writing poetry and teaching. And while she does indeed love poetry and literature, her true love is Dawson’s Creek. If she could bring it back and be a writer, she totally would. She lives in Austin, TX where she teaches writing and literature to the reluctant, but always lovable, teenagers at James Bowie High School. Her work has appeared in Saul Williams’ poetry anthology Chorus: A Literary Mixtape, the Barefoot Muse Anthology Forgetting Home: Poems About Alzheimer’s, the Redpaint Hill Anthology Mother is a Verb, and 5AM Magazine. She holds an MFA from the Writing Seminars at Bennington College. You can read some of her work at breerolfe.com

Besides the ones where we’ve been

If there were new places for us,
I would think they’d have hammocks
putting our faces inches apart,
smooshing us closer together.
There would be streetlights and we’d dance
even if we’d have to stop for cars,
even if neither of us liked the song.
Grooves worn and set—the places
we’ve been rubbed raw,
turning slow, grating circles.
The unintelligible point we never get to
(the middle of the night text)
We always send, but promptly forget
the cryptic message.
In backyards, we regret losing—
the letters we burned on a gas grill.
Like the perfect black ink on your bare back,
I’d want the new places to stand out:
I’d want to them to shimmer, like washing
the words off and forgetting they were there.
No matter how hard we tried, I’d want
them to be places we could never get back to.
I’d want them to be unfathomable.

The ever-living ghost of what once was…*

Imagine, Tom Petty and my mother,
the same age, sharing a Scorpion Bowl
in whatever semblance of heaven
I’ve assembled to make myself feel better.
There was the day on our front steps
when I was eight, where she stepped
on a grasshopper I told her to avoid,
she didn’t listen and crushed it.
When I flipped, my father said…
Gayle, she tried to tell you
I built a house for that grasshopper
out of a matchbox but really who has
an actual matchbox for wooden matches?
Is there a ghost in my house?
One night, I came home with my friends—
completely high—maybe drunk
as she backed her Toyota Camry out
of the driveway. I leaned into the driver’s side
window, expecting to be in trouble,
but she said go into the house.
I’ll be back. Everything is going to be okay.
Later, I came home at dawn tripping
with fresh, hot donuts from the grocery store.
My dad left without a word because
he had traffic and manual
labor to deal with. My mother, heading
to the hospital where she worked,
muttered something like you’re going
to get it when I get home.
But I decided that morning, in a fog
of dough and acid, I am an adult.
If I want to come home at 6 am
with my dude friends, then it’s fine
We huddled in the basement.
Watched Troll 2 out of pinhole eyes—
freaked out and in love
like when you’re night swimming
and remember there’s a dead cow
at the bottom of John’s Pond
or that you got away with being fucked
up because your dad was cheating
on your mom. That no one noticed
you were crying in that sliver
of a bathroom or that you were making
out in the backyard with a boy
who had a prison tattoo of some other
girl’s name or that the trampoline
had a tear half way through it and soon,
someone who fall through, break something,
and it would totally be all your fault.
*from “No One’s Gonna Love You More Than I Do” by Band of Horses

We went to Montreal— okay, so it was
Maine, but there was a cobblestone square—
We walked through it late at night.
You and I on a hotel bed. And the fight
that made everything over.
Or the one you still say is the end.
And in the photographs on the wall
I could see it— Pavement ends soon.
And then, a dead fish.
Sometimes we fight our way out
and sometimes we fold in.
In fake Montreal because I talked
you out of real Montreal—there was a girl
on a dance floor and you fell
in love right in front of me.
And this was the end— not
what you said on the bed.
And most Decembers, you’ll say
you love me. And most Decembers,
I won’t believe you.