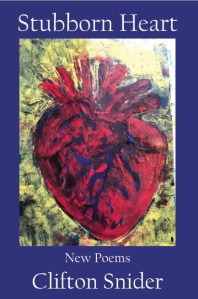 Poet Donna Hilbert, author of Gravity: New & Selected Poems, writes, “Clifton Snider’s beautiful collection, Stubborn Heart, maps his world from mid-western Pentecostal beginnings, coming of age in Southern California during an era deeply scarred by homophobia, and traveling through Reykjavik, Istanbul, Quintana Roo among many destinations. But, the real terrain is the human heart, most poignantly, watching his beloved’s march to destruction: Goodbye to torment and to hope./ Our love is now the stuff of stars.”

This entry was posted on June 14, 2021 by Grimmgirl in Sheila-Na-Gig online: News.