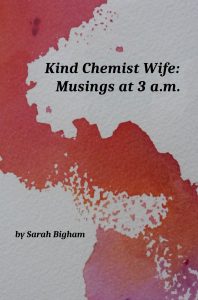 Plagued with spiraling pain, and wandering the house in the middle of the night unable to sleep, Sarah Bigham began writing in a desperate attempt to distract herself. This collection of her essays and poems ranges from lyrical to mystical to humorous to soul-piercing. Readers will laugh, cry, and nod in agreement as Sarah reminisces, observes, and describes the journey of an ordinary person living a quietly extraordinary life.

Sarah Bigham teaches, writes, and paints in Maryland where she lives with her kind chemist wife, three independent cats, an unwieldy herb garden, several chronic pain conditions, and near-constant outrage at the general state of the world tempered with love for those doing their best to make a difference. Sarah’s poetry, fiction, and nonfiction have appeared in a variety of great places for readers, writers, listeners, and thinkers. Find her at http://www.sgbigham.com.

This entry was posted on March 6, 2020 by Grimmgirl in Sheila-Na-Gig online: News.