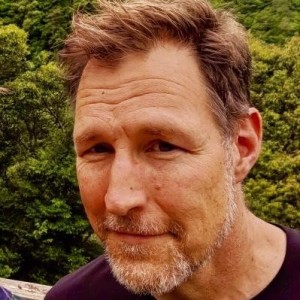 Kevin Roy: I have been a family scientist in public health at the University of Maryland College Park for over 20 years. But I have been an active poet for even longer. I have published in the Broadkill Review with forthcoming poems in The Shore and Slant.

If the week at your parents’ house was given to me—the crop dusters that tore out low over the Wicomico,

the rotting apples and wasps dumped into a ditchwhere I pushed the mower, the moss on the floorboards,

years of pine needles, bottles of Pimm’s brought backfrom England, fooling around in the dark at your father’s law office,

the local newspaper, a watermelon in your grandmother’s icebox,the used clothing store where nothing ever fit me

but you found boots straight out of the Haight, the burned pumpand sucked well, the five-gallon water hauls from across town,

midnight showers on the boat at the dock, thick cold blackberry jam,loading the chest of drawers, emptied to make it manageable,

a glass of juice that you left by my bed, desperate walksaround the perimeter road at dusk, mapping out a lifetime

of Seattles and Santa Fes, eaten by mosquitoes, the ragweed,the silence of the place, and the emptiness we added, and always the river,

the mud-flow river, the grand Christmas-light barged river itself—if all of this was given to me when I returned,

I give it back now.

I will take only the view I had of you, combing raspberry vines,humming to yourself, back-turned and oblivious to me,

my stiff sweatshirt big on your frame, the women’s tennis shoes you never wore,poison ivy blushing your ankle points, fingertips combing and picking.

singing to yourself,cut and fearless girl.