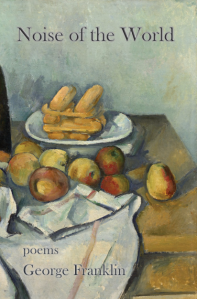 George Franklin is the author of a new full-length collection, Noise of the World (Sheila-Na-Gig Editions), Traveling for No Good Reason (winner of the Sheila-Na-Gig Editions competition in 2018), a dual-language collection, Among the Ruins / Entre las ruinas (Katakana Editores), and a chapbook, Travels of the Angel of Sorrow (Blue Cedar Press). He practices law in Miami and is the co-translator, along with the author, of Ximena Gómez’s Último día/Last Day (Katakana Editores). Buy Noise of the World

Tonight, my leg hurts, and my eyes are tired.
I read Mandelstam’s poem for Tsvetaeva,
Moscow in 1916, the sled they’d hired
Careening through dirty snow, chapel of a

Church with an onion dome, not a white-spired
Arrow that penetrates heaven, or Platonic love,
Poisonously insipid, weakly desired,
Not Protestant either, but lit by candles above,

Below the altar; outside, smell of horse merde,
The beast exhaling steam, its crusted hooves
Knocking against the ice, the driver’s black beard

Rocking along as he snores; inside, a dove’s
Dry feather against her cheek, prayers unheard—
The moon like ripe garlic breaks into cloves.

I’ve grown used to disappearing—not
Being here anymore as me, that
Sequence of whatever stories I
Tell myself to create a person.
There, in each other’s arms, stories stop,
Thought ends, the way it ends in air-blue
Emptiness, the ragged edges of
White clouds becoming transparent, leaves
Shuffled against leaves, invisible
Wind, buzzards circling hundreds of feet
Above the ranch-style houses, asphalt
Driveways, streets that twist back and emerge
Into the fast flow of traffic south
Or west, toward fields green with tomato
Vines and strawberries, tangled thorns of
Bougainville, shallow marshes that
Somewhere become ocean.  The buzzards
Don’t see me, sitting by the window,
Staring up at heavy coconuts
Clustered together, fronds and tree limbs
Moving at the same time, some almost
Imperceptibly, and if I look
Hard, I won’t see myself in any
Of this either.  The tree limbs and sky
Will still be there, the buzzards too, but
I won’t exist as an audience.
This morning in the kitchen, it was
The same.  I kissed that spot where your neck
And shoulder meet and lost myself in
The scent of bath soap, of dark coffee.

In the Last Days of an Empire

My son’s in the kitchen making breakfast,
Pouring shots of espresso into his chocolate milk.
The sun has finally come out after a morning
Of rain, and now it cuts across the backyard
Past overgrown green bushes and variegated vines,
Filtered through the branches of black olive trees,
A shining liquid dripping onto the roof and the gray
Stained boards of the fence.  Whatever else Simon
Prepared, he’s disappeared with it into his room.
I’ve never known if I’m a good father.  I’ve always
Let my children do what they wanted.  My oldest
DJ’d through his teens all over Massachusetts, driving
At night with vans of equipment past triple-decker
Neighborhoods where the porch lights had already
Gone dark.  My daughter headed off to France as
Soon as possible.  Now, she’s in Brooklyn, with her own
Child, writing short stories, poems.  We commiserate
About rejections from magazines.  Simon emerges
To tell me he’s finished the third episode of his
Space-opera-slash-anime-slash-superhero-fiction.
I try to pretend I’m not too old to understand
What that means.  It’s unlikely any of my children
Will become rich.  They’re all too much like me, with
Too many other things to do with their lives.  The golf
Course next door closed last spring with the Covid
Shutdown and hasn’t reopened.  It’s been taken over by
Birds, flocks of ibises, ducks, trees filled with crows.
Right now, they’re enjoying the afternoon sunlight,
The ponds still cool from the storm this morning, and
The quiet that comes with not giving a damn.