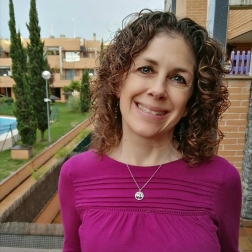 Julie Weiss found her way back to poetry in 2018 after slipping into a nearly two-decade creative void, and to her shock and delight, she began publishing her work almost immediately. Her poems appear in The American Journal of Poetry, Sky Island Journal, Santa Clara Review, Random Sample Review (Best of the Net Nomination), Lavender Review, Sinister Wisdom, and Barren Magazine, among others, as well as in a handful of anthologies. She´s a 45-year-old ex-pat from Foster City, California, who works in Spain, where she lives with her wife, 4-year-old daughter, and 2-year-old son. You can find her in her studio, writing late at night by the light of the moon, and on Twitter @colourofpoetry or on her website at https://julieweiss2001.wordpress.com

There was a time they’d dart along the path
like a duo of foxes, whizzing past two-hundred
year old oaks, my daughter trailing after
her best friend, a game of tag. As we rounded
a bend, calling their names, laughter would
rain down among the leaves, drenching us
in the colors of autumn. When they leaped
in front of us, as they always did, we’d feign
fright, reeling as if they had bared fangs.
There was a time they’d cram their pockets
with fallen acorns, plop side by side on a lump
of dirt and count how many each had collected.
They’d swap big ones for round ones, texture
for color, then hand them to us as if they were
rare jewels or the fixings of their last meal on earth.
They’d scale hills as high as forever, ignoring
our warnings, unconcerned with the avalanche
of rocks and twigs under their feet. On they’d
climb, under the sky’s watchful eye, aiming for
a storybook land shimmering somewhere beyond
the sun. There was a time before the anemia, before
the weight loss, before the cancer had weakened
her bones, when even falls were magical;
they’d come face to face with ant colonies
and such a hush would flood the forest
we could nearly overhear ant chatter.
Today was different. My daughter led the way,
her best friend limping behind her, as fast as
the pain would allow, more mouse than fox.
Hills, looming like beasts, could have yawned
open, latched onto her lips, sucked the air
out of her lungs in a matter of minutes.
Trees might have flailed their arms, knocked
her to the ground, snapped her body in half.
She was only four and she knew this.
Rather than resuming their usual forest
shenanigans, she sauntered off the path, clutching
my daughter’s hand, on a quest for the perfect
hideaway, a place where the doctors wouldn’t find her.