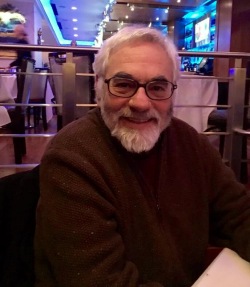 Steve Klepetar lives in Saint Cloud, Minnesota. His work has appeared widely in the U.S. and abroad, and has received several nominations for Best of the Net and the Pushcart Prize, including four in 2016. Three new collections have appeared in 2017: A Landscape in Hell; Family Reunion; and How Fascism Comes to America.

A Memory of Dust

Remember that we are dust. It is said
That this place of our passage is prone to mirages — W. S. Merwin

Every day our bodies swirl in the wind,
even if the air is still.

We live in fortunate houses, far from
the sea of smoke.
We nurse our own concerns.

Refugees cross the desert
and sink into sand.
Their houses have broken and bled.
Every day more rain, more smoke, more dust.

We track our long lives in words.
Our pink bodies rise
in bubbles above the troubled earth.

For many years, this flesh will suffice,
until ground into pebbles,
or rubble, or even fine grains of seashells
crushed on a beach.

We expect them to rise again
to inhabit houses built into rock.

The refugees have formed a bridge
of bodies. Some are dead, some have lost
their hands. Some have been turned into smoke or ash.
We don’t know them at all.

One day the mountains will reach the sea,
and their crossing will be thunder.
And on their brows, lightning and rain and a memory of dust.

If only we could inhabit words
the way fish glide

through streams
on mountains where ice

cold, only be breath
of great white bears

as they prowl arctic seas.
Heat would be a whisper

in our ears, a motion
in the air, then a long slide

to a tap, a touch.
We could ride the rain,

its sleek rows,
and be salt dissolved

in the waiting arms of waves.
We could rise in a bubble

of words,
see the world in all

its cubist wonder –
bosons and flavored

blossoming coronas,
even the fiery hearts of stars.