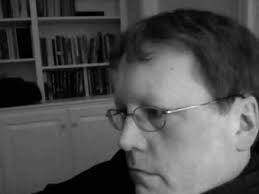 Ace Boggess is the author of two books of poetry: The Prisoners (Brick Road Poetry Press, 2014) and The Beautiful Girl Whose Wish Was Not Fulfilled (Highwire Press, 2003). His novel, A Song Without a Melody, is forthcoming from Hyperborea Publishing. His writing has appeared in Harvard Review, Mid-American Review, RATTLE, River Styx, North Dakota Quarterly and many other journals. He lives in Charleston, West Virginia.

Awake, I Run a Hand Through My Hair

age creeps through unlocked doors
smoky eyes scanning the room for swag
sickness bitter with its breath
places the least romantic kiss upon each cheek
what follows is a Veterans Day parade
of old friends marching in step
doffing their imaginary caps
“he just wants to sleep” someone says “why won’t they let him?”
no chapter on letting can be found in the manual
its pages filled with line after line of say goodbye
the dying continues for centuries
in a bed that smells like the backseat of a car
while Death’s voice rings from a shower down the hall
singing a love song from long ago &
patiently waiting for all the guests to leave

Robbie the Robot makes Kentucky bourbon,
gallons of it, more than twenty light years from home &
anything that might be named Kentucky.
Can we call it moonshine on a planet no moon orbits?
Or maybe too many, though we never see them?
Moons-shine? How about burning-death-of-a-red-sun-
shine? This is the future as I imagined it:
the frantic wildness & emptiness of worlds,
young men tripping up from space lust,
the pew-pew-pew of purple laser fire,
how we might die from unconscious thought &
never know what tears us apart. Then, of course,
there’s Leslie Nielson who saves the day &
gets the girl in the glittering, golden mini-dress
decades before he made his imprint on the culture
by playing the heroic doofus, utilizing slapstick &
irony—a future too strange to imagine,
even for the writers of this oh-so-serious film.