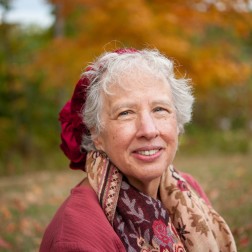 What people in town remember about my family’s home
was the dirt in the fenced front yard where no grass
could stay grown, worn down by the feet of the kids
Mom kept in the daycare where I worked too
the summer I was 15,
in my shorts and tank top,
sitting out on the rock wall that bisected
the dirt of the yard from the dirt of the driveway.
Once an old woman driving stopped, I don’t know how old
is old, maybe the old I am now, older than dirt,
carved crevices around her mouth,
to tell me she once had a waist like mine,
steep sloping down,
though her ass sat up higher.

I have been thinking about dirt,
or maybe the rock along the road
I never noticed I’d noticed growing up there,
sandstone and shale striated with coal
that always looked wet even in summer,
grass a paler brown than the dirt
which, depending on where in the county you were,
might be a gravelly sandy stony silty loam.

On the road out of town,
KY 15 to the Parkway to the highway—
an hour to there and you’re almost to Lexington
where there’s something to do, not sit
surrounded by kids and old
and dirt (rough broken mountainous
deeply dissected).

I didn’t know that I knew
how the farther you got up the road
the coal is gone,
there’s clay in the rock
and the grass is greener,
I mean, really it is,
on the other side.

There is one patch of route 15, just north
of what was home, where whatever weather is,
there is more of it—cloudburst, blizzard, smear
of sun that finds its way through needle eye
of mountain. You’ve pulled the tangled thread
of road with you this far. Go on. No one
waits, hand up to curtain listening for your
graveled turn. There’s only past throwing
its shadow on the lane that sends you back
toward what is gone. Your eyes will soon adjust.
When did you know it’s not enough
to carry splintered pieces underneath your skin?