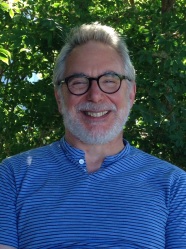 I am the co-editor of the best selling anthology of art and poetry, In Drought Time: Scenes From Rural and Small Town Life, published in 2005 by Mayapple Press that featured many award winning poets like Laura Kasischke and Thomas Lynch. I was a finalist in the 2016 Mudfish Magazine poetry contest judged by Edward Hirsch. I was a semi-finalist in the 2016 poetry book competition sponsored by Concrete Wolf Press, and will have two of my poems published in their anthology early next year. My poetry has recently been published in the Third Wednesday Anthology and in SLANT Magazine. My poems have also appeared in The Current, Sweetwaters, and Broken Barricades. I have recently completed a novel, The Corridor, based on my experience as a community organizer in Detroit during the 1980s. The poem below is part of a larger collection yet to be published entitled, Social Work and Other Myths.

A prisoner of the moon’s gravity, I kneel
in the dirt and shadow of a maple tree
we planted years ago for our children to climb

they are gone now, moved to the coast
a ratty tire hanging from a gnarled branch
reassures me it was not all an illusion

the fog is late to burn off this morning
out walking I hear their mad call
in the distance coming toward me, louder
with each breath until fear drowns out
the harvester thrashing corn in a nearby field

the flock of geese zig-zag above me
hidden by low hanging clouds, sound lost
frantic to find their group, the swoop of wings
push them through the mist, silhouettes
seen for a moment against the gray sky
then gone into the murk and silence

lost in the fog with a vague notion
the sun has risen in the east but no real proof
sure this is my last chance to shake off
the albatross, to banish my holy melancholy
to walk down this road for as long as it takes

a gust of wind knocks me to the ground
onto a pile of leaves, I roll down to the creek
lay there until the mist clears and see the sky
fill with enough snow to bury me, stick out
my tongue and await communion

I want to sing like a fish, I want to fly
like a turtle, I want to run like a snake
I want to dance like a snail, I want to
sleep for a hundred years

and wake to the flutter of new wings
tapping the walls of a silk spun bag
in no hurry to prove I can fly, content
to cure in the goo of my cocoon