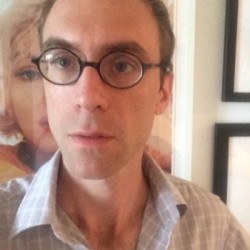 Patrick Bower lives and writes in Brooklyn, NY. He holds degrees in English and Classical Literature from Indiana University and supports his poetry habit with a career in copywriting. His work will appear in 805Lit in the Autumn of 2016.

One Bad Mother (To Lou Reed)

Like you, I came here to take a long walk,
to sun myself under the neon like a pupa
who can’t decide whether to fly right
toward the light or to wriggle deeper

gilt factory floor shows, to 3-night days
stabbing blindly into the vascular
hallways of temporary celebrities
and all the little mothers who paint

themselves like mothers but whose
slight hips and dots-for-eyes are
another thing yet. You frown, I frown.
There’s city noise and other noise still,

the kind that can’t be quelled by 450 volts
to the frontal lobe of a teenage queer.
Thanks, mom. Thanks, dad.
Thanks to all the presupposing Jim-Jims

who don’t know the first thing about you,
who still think you’re a clumsy demon
with a bad voice and de-tuned guitar
who tried and failed to be a pop star.

But you know who you are, and, maybe,
so do I. Like you, I stand quietly inside
the din and keep the fibers of my cocoon
wrapped carefully around my heart.

Like you, Lou, I hear a song with no
beginning and no end, a song that
doesn’t come from heaven but from
the grinding gears of old subway cars.