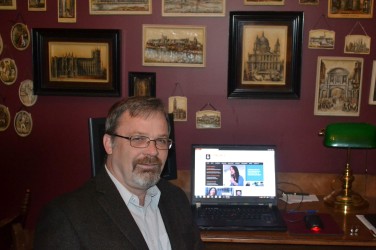 Lawrence Hopperton lives in Stouffville Ontario. Former editor of the University of Toronto Review, and founding editor of Nimbus Press, his poetry has been published internationally, most recently in the Fifth Lummox Anthology out of Los Angeles. His first chapbook, Songs of Orkney and Other Poems was published by South Western Ontario Poetry in 1983, and his second chapbook, Ptolley Bay, published by Lyrical Myrical Press appeared in 2013. Larry currently works as the Director of Distributed Learning at Tyndale University College & Seminary.

Born of wind and wave, mother ship
and the sky, and the water is
split beneath the prow-thrust and sprayed
across decks, swaddled in sailcloth,

lulled by the roll and the rigged hum
all around. Wind and current choose;
the rudder and compass follow.
Your shoulders will scramble up shrouds

from rails to horizon whitecaps
touching the sky. Feel the rocking
heart creak. On the edge of your world
reach the space of sleep.