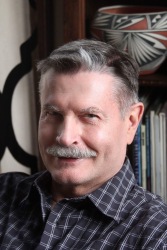 Clifton Snider, faculty emeritus at Cal State University Long Beach, is the internationally celebrated author of ten books of poetry. His new book of poems is The Beatle Bump (Los Nietos Press, 2016). A career retrospective of his work, Moonman: New and Selected Poems, was published to great acclaim by World Parade Books in 2012. He has published four novels, including his first historical novel, The Plymouth Papers (Spout Hill Press, 2014). A Jungian/Queer literary critic, his book, The Stuff That Dreams Are Made On, was published in 1991, and he has published hundreds of poems, short stories, reviews, and articles internationally. He pioneered LGBT literary studies at CSULB. His work has been translated into Arabic, French, Spanish, and Russian.

Balm in the Cuban Night

We sit on the concrete wall
marked in black graffiti–
Havana’s Malecón.
The lighthouse of el Castillo del Morro
beams a single light
behind us
at twilight.
Arms around each other,
we pose for the camera:
compelling, deep brown skin
glows with inner light,
smile of a model from
Santiago de Cuba
next to the older poet,
pale with skin alight,
and gray mustache.

Lighting flashes in the distance
over the city
beyond construction cranes.
He warns of the cannon boom,
from the castle,
thunder in the dark
at 9 o’clock,
remnant of Spanish rule
call to curfew,
and so it blasts
and we take our walk;
smart phone lights the way
to a ride together
in the back seat of a 50’s
Dodge convertible,
red as the blind blood
flooding my heart,
emerging magic
and mystery,
Cubano y Americano
making some kind of music
in the balm of the night.