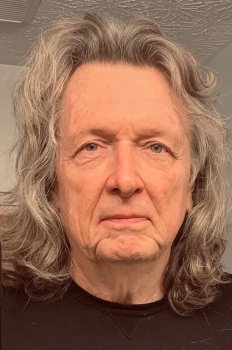 Roy Bentley, a finalist for the Miller Williams prize for Walking with Eve in the Loved City, has published ten books; including American Loneliness from Lost Horse, who recently issued a new & selected. Recently, the Main Street Rag has published a collection of his poems called Beautiful Plenty. Roy is the recipient of a Creative Writing Fellowship from the NEA, and fellowships from the Florida Division of Cultural Affairs and Ohio Arts Council. His poems have appeared in The Southern Review, Crazyhorse, Rattle, and Shenandoah among others. Also, Hillbilly Guilt, his newest, won the 2019 Hidden River Arts / Willow Run Poetry Book Award.

—photograph from The New Yorker

As butterflies go, this is a representative lacewing:
gauzy-white-winged and of the neuropteran variety.
But the lepidopterist holding the Little Pretty Thing

is Vladimir Nabokov, thirty years before his death.
The bug scrutinized in The New Yorker photograph
is an adult butterfly; and, though still and deceased,

I imagine his Lo in a cottony dress, flitting about:
Lolita, who knows exactly nothing of the nature
of lacewings—Lolita, the Object of Obsession.

In the novel, after sex with a lecherous older man,
she poses a question about Lima, Ohio—I’ve been
to Lima, Ohio many times. Spent summers in Lima,

thanks to my mother Nettie Potter’s beloved sister
Peggy Potter Ramsdail living there after Dayton.
I don’t want to say it’s a shithole. The Russian

novelist holding the lacewing said as much.
But then he didn’t sleep outside in a tent
just off Sugarcreek Road near Beaverdam—

afoot in the summer night, basking in love.
Lacewings suck the worth and lifeblood
from other live things. They eat unhatched

eggs, and so the future. It’s ugly—like Lima.
I suppose small-town Ohio is a kind of torture.
I guess it’s up for grabs, what constitutes cruelty.

Why We Walked So Far Together That Summer Night

I want to tell you about a walk I took with Jim and Bob
Ramsdail. Jim and Bob and me and three other Ohio kids

walked twelve miles one summer to a convenience store
in Beaverdam. We were underage. They sold to minors.

When we got there, The Birds was on a tv at the counter.
We had blisters, an identical walk back to look forward to.

I dropped a fake ID on the beer, started counting quarters.
Tippi Hedren was running for her life in the scary world.

It all makes as much sense as a woman in stiletto heels
escaping from a raincloud of corvids. The guy rang up

the beer. He watched The Birds as he did it, and Robert
Daniel Ramsdail, II is dead now. I called him Bobby—

there were others with us that night, I’ve left them out.
Maybe they don’t want to be in a poem if what unfolds

is, really, an excuse to say Bobby Ramsdail a lot and
resurrect a loved one in the way poems can if a poem

is a long night-walk wherein we overhear what is said,
see Bobby, or Jim Ramsdail, point to the sky in answer.