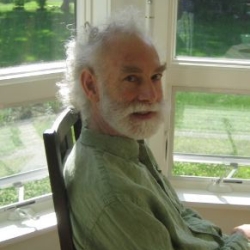 When I’m inside I close the door, close and lock the door and put the key in a safe place where I
know I won’t be able to find it, as if it’s an excuse to stay inside, even though I don’t need one.
Not even bothering to straighten up, it doesn’t matter as long as you’re not going anywhere. I’m
leaving my eyelids alone, along with the pupils, touching the tips of one hand to the tips of the
other, putting my hands in my lap as if they’re coming in for a landing, I think I have plenty of
energy, although it’s mostly potential—my wife doesn’t notice, she’s not even looking up from
the new translation of Medea she’s reading, it’s difficult to compete with a woman’s resentment.
I often walk across the room, picking myself up like a doll you put away when you’re finished
playing with it, holding onto the doorknob because it’s smooth or opening the curtains, left side
to the left and right side to the right, when I’m patient I sit down next to my cell phone and wait
for it to charge, checking my bookends to make sure they’re holding up. Sometimes I put on my
coat and take it off, as if I need to experience the alternation, staying in the same room or
moving from room to room, walking across the room from right to left then left to right, it
doesn’t even matter when you’re not going anywhere. Everybody knows the world is open in
places and closed in places, if you don’t open the door it’s not going to be open, if you don’t hold
it open it’s not even going to stay open, like a kind of immunity you don’t even notice. I actually
think there are too many locks and not enough keys, I’m not even opening the door, or waiting
for it to open—it’s not because I’m not paying attention, not at all, I believe a person’s attention
is a shovel and also a rake, digging up and smoothing over at the same time.

When we blew out the candles we didn’t see anything, nothing at all, we don’t even know how to
make exceptions—it’s a form of fair-mindedness we often admire in others. I actually think
we’re more accessible to others than we are to ourselves, do you think it’s true? At the same
time we were under pressure we were pressing at about the same time, when you emptied the
fridge and didn’t even bother to fill it up I didn’t stop eating, I’m not interested in retaliation,
seriously what’s the point? Not arguing—it’s embarrassing to argue, it’s not worth it, we’re not
even hungry at the same time. Pressing in on one side and pushing out on the other, I actually
think we’re agreeing with each other. At the same time we started taking up more space, I’m not
even sure how it happened—of course the future is different from the past in the same way as the
past is different from the past, do you see what I mean? First you start pressing, then you’re
under pressure, pressing on each other like a fitting, squeezing out the little spitballs of juice.
Then the wind settled in between us and blew out all the candles, pressing out from a point
between us and pushing us out at the same time, blowing us away from each other like a kind of
self-defense—when you’re not hungry I’m not going to stop eating.