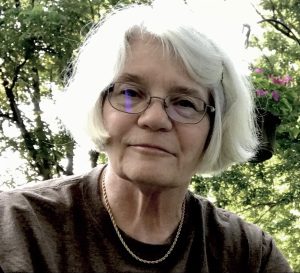 Cathryn Essinger is the author of five books of poetry–most recently The Apricot and the Moon and Wings, Or Does the Caterpillar Dream of Flight?, both released this year  from Dos Madres Press.  Her poems have appeared in Poetry, The Southern Review, The New England Review, The Antioch Review, Rattle, River Styx, and other journals.  They have been nominated for Pushcarts and “Best of the Net,” featured on The Writer’s Almanac, and reprinted in American Life in Poetry.  She was Ohio’s Poet of the Year in 2005 when she received an Ohio Arts Council Individual Excellence Award.  She is a long standing member of the Greenville Poets, a small but well established writers’ group that meets in Greenville, Ohio.  Cathryn is a retired English professor who now spends her time raising monarch butterflies and trying to live up to her dog’s expectations.

The catbird is complaining about the cat
who is sitting under the honeysuckle
grousing about the catbird,
who has no nest to protect, who long ago
sent her fledglings into the air, but is still
full of epithets about the cat
who simply wants the bird to go elsewhere,
to stop announcing her presence
while she is hunting for chipmunks,
although by now every available rodent
has dug in for the evening or left for safer
territory where there are no catbirds,
and certainly no cats, while the two of them
mock each other as if this is a genuine dispute,
which may explain the cat’s frustration
as the catbird, that dilettante, that charlatan,
that grey-capped mincing annoyance,
tries out new trills and voices.
It would be so easy for the catbird to simply
fly away, but no, she persists, bouncing from
one limb to another, meowing in that raspy,
cranky voice that sounds nothing like a cat,
if you are a cat, or too much like a cat
if you are a chipmunk or a critic
with an ear so discerning that now even
the cat can no longer sound like herself,
unless of course there is no catbird.

What Passes As Conversation

By the time clouds have cleared and I find the old binoculars, Jupiter and Saturn have
already “kissed” and turned away from each other, Still, I am glad I saw it, something
about the way they glanced over their shoulders made me think they had something to say
to one another, but never mind, their paths would cross again.
********
Now that the leaves are down, we can see what the trees have been up to all summer–the
grand gesture of the oak, the graceful reply of the maple, a conversation they have been
having for more than forty years, a give and take with the sun.
********
The little squirrel with the skinny tail, the one I worried about all summer, has come to the
kitchen window looking for a waffle or a piece of toast. Nights are getting cold, but he puts
one paw to the glass and catches my eye. He says he has a plan.
********
My granddaughter is coloring a picture of a lamb. It is hard work–white on white–and a
curtain of hair falls over her face. I brush the hair back, secure it with a pin that will never
hold, and make a quick apology for the cowlick that I know she inherited from me.
********
This morning I asked my husband, “Is that frost on the grass, or did it snow a little bit last
night?” He didn’t looked up from his newspaper, but he answered anyway, Dunno,
Babe…just don’t know.