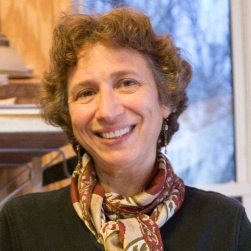 Bonnie Proudfoot has an MA in Creative Writing from Hollins College in Roanoke, VA, and currently teaches at West Virginia University. She is a recipient of a Fellowship for the Arts in Creative Writing from the West Virginia department of Culture and History, and has had fiction and poetry published in the Gettysburg Review, Kestrel, Quarter After Eight, and other journals. Her poetry has received recognition in various competitions, including, Ohio’s Power of Poetry Festival. Her first novel, Goshen Road, has just been released from Swallow Press in January of 2020.

It’s the grip, the hold, the reach,
the let go and the follow through,
and still that softball wobbles like a flapjack,
catching the wind and hanging
while the runner heads for home.
There should be nothing to it –
just hurl it, for crying out loud,
blast it – but that stutter, that hiccup,
all bogged down, like a thought
you tried to force yourself
not to say, or like waking up to find
that you’ve grown breasts
and the world treats you differently.
Men stare in bowling alleys
and on buses, small talk disappears
into weighty pauses. They are just there,
like the huge peaches that grew
on our scrawny gallows of a tree
that bent almost double from the weight
of the rose-tinged fruit.
It is more than you wanted
and it is less, too,
some part is now missing,
and this new you
is not you at all. You need certainty,
now all roads lead to humiliation,
the kind of shame that
arcs back and forth
between you and your body.
It cools you down, gets
in the way. You want to be nimble,
you want to mean business. You want
the kind of heat that burns
like a fastball, you want to take
no prisoners, and you will not,
you can bet on it, once you figure out
how to get your own self
back into the game.

We stayed up all night on the rooftop,
where empty bottles of MD 2020
and tubes of airplane model glue, spent,
lined up in piles next to the pigeon coop
with the small arch shaped windows,
the thick spattered drips of shit running down the bricks,
the soft sleepy coos and clucks of doves
the breeze that carried clouds of soot,
the exhaust of diesel buses and smoking brakes
delivery trucks from the street below, all that rancid waste
somehow sweetened by the must of feathers and warm tar.

The only reason was because we could,
because our parents were out doing what parents do,
because our learning required that we see the world
from a different perspective, because the neon sign
of the bowling alley down the block and across
the street shone alternately pink and green, and
because the pre-dawn sky was a dingy brown
with the glaze and grit of the streetlights and
the eastern star, and a sliver of a moon hanging.

And on the radio were Diem and Ho, and on the tv
Buddhists set themselves ablaze for peace, but for us
it was nothing but spray paint and red brick and plywood
and how good and bad became confused with each other
in ways we just couldn’t reach
or wouldn’t have known how to talk about.

And we were sunburned and we were moving
like an underground army, through tunnels
beneath buildings, and up the stairwells,
through the banging steel-hinged door where
warm ooze stuck to our naked feet, and chunks
of glass and brick mixed with feathers,
and when we looked toward the east
we could almost see the elevated train,
the Jamaica Avenue line, and beyond that, Rockaway,
the ocean and forever, and we could turn the radio up
as loud as we wanted, this house of the rising sun,
this sun that burned through the thin distant haze,
and we spread dirty sheets on that sullied ground,
and after making art, we looked at the sky.

My dog snaps at bees, he angles toward them,
following with his nose, nearsightedly inspecting each bee
in a way that would make me nervous
if I was that close, which I almost am,

holding the other end of his leash. More than once
bees have swarmed me as I stumbled onto a hive,
but the first time it was on the shortcut
to Toni Bacon’s house, and only later I realized how huge

the entrance was, a dark cavity on the edge of the trail,
bees zeroing in, racing out, a secret underground society
brimming with danger. Toni’s mom applied baking soda
to my arms and neck, soaped the skin on my dusty feet,

checked to see if stingers had lodged. That was the last time
I walked barefooted to Toni’s house. I was 12, Toni was 14,
but having an older brother plus going to Catholic school
had made her seem even older. She knew what kind of sin

it was to kiss (actual), to allow a boy to slip his tongue
into your mouth (venial), and to kill someone (mortal),
and most mysterious of all, how confession cleansed
a person’s soul, no matter the sin. For about a week,

the welts smarted and swelled, meanwhile we heard
how Georgie Merusi bought an ice-cream pop
from the Good Humor truck at the edge of the beach,
and, taking his first lick, got stung on his tongue.

I pictured this in horror, the angry buzz still in my ears.
Georgie used to tackle me in the water, ducking under,
grabbing my legs out from below. I fought back,
but he was as solid as a block wall, a kid whose

hair spiked like a porcupine when his dad
gave him a buzz cut for football practice.
Soon school would start, things would change,
but I remember how he spun me around,

held me far enough away so I could not punch back.
Then he stuck out his tongue,
and all I could think about
was how fearless it felt to stare

at that famous tongue, like a gift
just to see it, how bright it seemed,
and how dark the mouth behind it,
his voice asking,