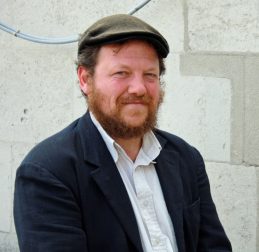 Atar Hadari’s “Songs from Bialik: Selected Poems of H. N. Bialik” (Syracuse University Press) was a finalist for the American Literary Translators’ Association Award and his debut collection, “Rembrandt’s Bible”, was published by Indigo Dreams in 2013. “Lives of the Dead: Poems of Hanoch Levin” was awarded a Pen Translates grant and is out now from Arc Publications. He contributes a monthly verse bible translation column to MOSAIC magazine.

When the ceiling fell
In the back room,
The bedroom where they would sleep
She complained to the landlord
About the building works –
Said they must repaint.
But the worst was
What she could not say
The dust that fell on his clothes
In the cupboard in that back room
All his suits hung still in a row
And until that dust she could go there
Open the door:
The smell of him was still in there,
She could go and smell the suits.
When they repainted the ceiling
They paid to have them dry cleaned
But the smell was gone from their loose seams
There was no longer anyone in.
And she paid for a truck from the homeless
To come and take it all down.
It was just a room , after that day
Just an argument with her son
If she had to repaint for the carer
Or leave the white as it was.
No body inside there,
Nobody home
Just the smell of the hardware
And he had finally gone.

The Woman Who Lived Here Before

Sometimes
Sitting with my children,
Hearing the music of their talk,
The rhythm of their laughter
I hear a silence, see a woman sit alone
In that front room
Tuning their absence
To a presence never gone.
The woman who lived here before
Asked to come stand by our door
And look at the view for her son
Who grew up in this house
And fell down the hill overdosed.
She wanted to see him again
The way he was when she still lived here then.
Tuning is not as simple
As fingering a dial,
Running a search sequence,
Rifling a file –
Sometimes the only one you want
Is right here at home
But you hear them
Gone already
On a frequency still to come.
That lone woman
Listening for children long gone
Calls, while your children
Stand on stilts around your garden
And start running for the fields
In moccasins you sewed when they were young.