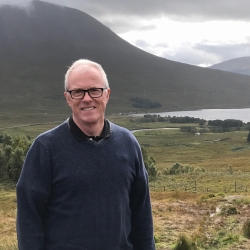 I am one of a handful of writers that lives in Nashville, Tennessee but does not play a musical instrument; although a friend once asked that I bring my harmonica on a camping trip so we could throw it in the fire. My wife says I cannot leave a room without finding out something about everyone in it, and telling her their stories later. I have a BS degree in psychology from Stanford University. My work has been published in Gyroscope and Waving Hands Review, and is forthcoming in Inlandia, Seven Circle Press, The Bookends Review, Glass Mountain, The Tiny Journal, Penultimate Peanut, Kind Writers, and Crack the Spine Literary Magazine.

Years after his death,
when I reminded her of her infidelities,
my mother shared my father’s
periodic intoxication with certain songs:
Ray Conniff’s “Baubles, Bangles, and Beads”,
Peter Nero’s “Mountain Greenery”,
and seven or eight versions of “Granada”,
he had me record on an 8-track tape
so he could play them continuously,
were each connected to a girlfriend
he’d had at the time. Songs
that I remember filling our house
on weekends he was happiest.