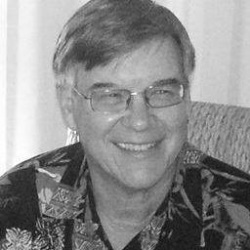 Richard Nester has twice been a fellow of the Fine Arts Work Center in Provincetown. He has published essays on social justice topics in The Catholic Agitator, a publication of the Los Angeles Catholic Worker, and poetry in numerous magazines, including Ploughshares, Seneca Review, and Callaloo and on-line in The Cortland Review, Qarrtsiluni and Inlandia. He has three collections of poetry published by Kelsay Books: Buffalo Laughter, Gunpowder Summers, and Penguin Love. His reviews of poetry have appeared in North of Oxford.

The cost of what’s lost is never clear,
some say one thing, some another.
Nearness matters, for good or ill,
and how one counts,
or can count, or is willing to.
I tell my wife I count on her. It’s true
and was happy leaving the single life.
Once and gone was all there was to that.
Still is (and glad). The best goodbyes
are thought of as simply exchanges,
the unparsed, uncalculated next
with its hopeful blue blossoms.
But nothing happens without cost.
New ease when it’s new can be unsettling,
its stiffness unfolding. If that’s all there is,
be grateful. The long, uncertain burial
of some things progresses forever, or is progress.
An image sticks in my mind: my mother
shuffling flowers in a vase, the one hand-thing
(of many) she still likes to do, does almost
compulsively—clipping, pruning, now satisfied,
now not—making a mess on the kitchen floor.
Very uncharacteristic of her, that willingness
to make a mess. Dementia’s gift to art.
My father lurching out the door on his cane.
“I’ve always hated that man,” she says to me
(a little stunned but not surprised)
then adds, “who is he?”