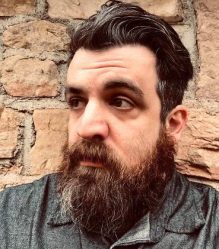 Craig Finlay is a poet and librarian currently living in rural Oklahoma. His poems have appeared or will be appearing in numerous publications, most recently, The Ilanot Review, Little Patuxent Review, Levee Magazine and After Happy Hour Review. His debut collection, The Very Small Mammoths of Wrangel Island, is forthcoming from Urban Farmhouse Press.

After the eagle and the rock, after Heracles
Prometheus lived quietly and old
shuffling down the vine-shaded streets of Jbeil
he made offerings at the temple of Adonis
loved the thick luxury of lampsmoke at dusk

He loved tenderly plucking overripe grapes
careful not to burst their skin,
how they gave way
to his teeth, and the juice, and yes
this was like making love

Even old and human,
Promoetheus suspected
he could not die, not in Jbeil
any more than Olympus

Still, he fished.
The harbor was his favorite
He watched the Achaeminds, then
Alexander’s fleets appear
he watched the Ottomans sail in
and cast his nets the same
and was gentle with fish, too.

Gentle he worked his knife
Under the skin, removing the scales.
Gentle too he pushed
It into their bellies and gentlest of all
he pulled them empty.

Only periodically,
when he was sure no one could see
did he run his knife along his own belly,
drive his hand deep, and search for the place
where his own blood became a penance
he still felt he might owe to God.