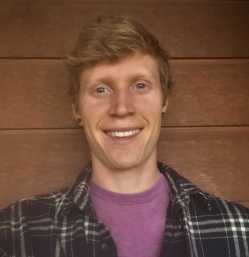 Chris Ketchum is a poet from northern Idaho. He is a current MFA candidate at Vanderbilt University in Nashville. His first chapbook, Invasive Species, was published by The Chrysalis (Willamette University) in 2015.

It took all morning to part with the front door.
I was mulling over poems
Without much luck
While Jon fried potatoes to soak up the night before.

I said don’t let me leave
And he didn’t, but I didn’t listen
And now I’m sailing
Between 12th and 14th to drink in spring.

It’s February, magnolias in bloom,
And I lie with my head at the foot of the bed
Beside the desk that becomes the study,
where outside the rhododendron and papers

Flower yellow under door nails
Announcing another eviction.
It’s a simple thing to forget
With sun on the pavement:

A woman anchors a girl
To a bike by her hips, the sidewalk
So warm and bright you almost
Want to fall and skin a knee on it.