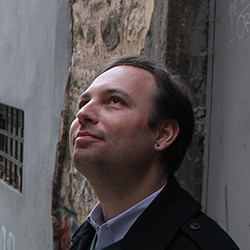 Carl Boon is the author of the full-length collection Places & Names: Poems (The Nasiona Press, 2019). His poems have appeared in many journals and magazines, including Prairie Schooner, Posit, and The Maine Review. He received his Ph.D. in Twentieth-Century American Literature from Ohio University in 2007, and currently lives in Izmir, Turkey, where he teaches courses in American culture and literature at Dokuz Eylül University.

We supposed the pin-oaks
on our acre’s edge
would age with us, and so carried
their adjectives close by—
slender and graceful,
then stately, then sad.
It’s been twelve years
since the cancer in your breast
appeared and receded—
a moth at sunset—
twelve years since we drank
champagne on the porch
and told each other God
was merciful and listening.
Now the news arrives again—
a mass, four millimeters only,
but near the bone, and you
must cough and go in blankets
room to room without me.
I make soup in the afternoon,
and you witness pines
instead of pin-oaks.
I don’t know why. The meds,
the slants of light, August
unbecoming to us all.
The worst of cancer isn’t death,
but that it carries us
to undreamed places: this
stairway, this fireplace
where yesterday in anger
you burned seven photographs
of the land we once called ours.

“For whatever reason—the overintellectualization of modern life, a too intense and willful
hyperconsciousness about ourselves—real life seems able to take place only when we are
least expecting it, only when, so to speak, we happen to be looking in another direction.” —Fredric Jameson

Look in another direction.
Disregard a while the olive tree
that’s consumed your thought
since morning. It rises, widens
imperceptibly without you.
Never mind, as well,
the fishing boat upturned
in the garden, long from water
& long from your memory of
that August afternoon
when it bobbed in the Marmara Sea
& you caught many mackerel.
These things are not the things
they were: absolved & meaningless
& maybe dead. Try not to
look at all, for in doing so
you murder what you want
& will find yourself alone.
Life’s an elsewhere—always—
& might be the inside
of a mussel shell purpling
this afternoon. It might be
your mother’s favorite blouse
fraying, even on her shoulders.
It might be as simple as a tin
of sardines, haf eaten, winking
on the distant island.