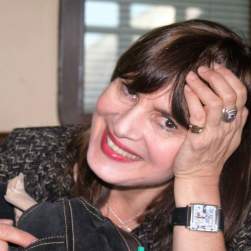 Betsy Mars is a poet, photographer, and occasional publisher. She founded Kingly Street Press and released her first anthology, Unsheathed: 24 Contemporary Poets Take Up the Knife, in October 2019. Her work has recently appeared in Verse Virtual, San Pedro River Review, Kissing Dynamite, and Better Than Starbucks. Her chapbook, Alinea, was published in January 2019. In the Muddle of the Night, with Alan Walowitz, is coming soon from Arroyo Seco Press.

The Return of the Termites

After it was agreed
that things had gone too far,
we brought in outside counsel.

By now every surface was covered
in grit, termites defecating
bits of what was left of our home.

They came with drills and chemicals
in masks and goggles, teetered
on ladders, did whatever they did
to repair the holes.

We rested assured the blight was gone.

Two months later we find them
on an August day beating wings
on the cool tile floor, in the hamper,
in the drawers.

One catches in my clothes.
More swim the shallows of the shower,
fallen from the overheated rafters.

I wield the spray
and wash them down the drain.
The next day there are more.

The structure is being eaten,
the beams are weakened.

Suddenly we find ourselves falling
through the foundation,
our marriage collapsing
while we were busy looking elsewhere.